There are 10 hotels from Sand Springs to Claremore owned by Promise Hotels headquartered at 5525 W. Skelly Drive. The two newest acquisitions face each other on the entrance road to the Tulsa International Airport airline terminal.

The hotel company is an example of the classic American experience having its beginnings in what the owner described as a “Mom and Pop” operation … a motel on Route 66 in El Reno. 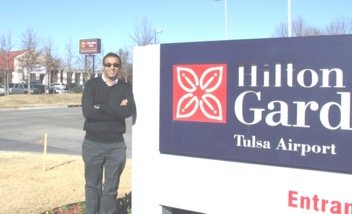 The family’s roots were as farmers in the Gujarat state of India, on the western side of the subcontinent fronting on the Arabian Sea.

Patel spoke no English when he came to his new country. Today, the vernacular of this Oklahoma State University 1994 graduate of general business management and marketing is pure American. It was about that time that a small hotel was acquired in Tulsa and “were able to grow our business,” he said.

Although the family name means “land tiller,” Patel knows the hospitality industry from the ground up. He remembers cleaning up and changing the linens while watching the Saturday morning cartoons shows on TV as he went from room to room.

As president and chief executive officer he no longer cleans the more than 800 Promise Hotel rooms. The company now has about 500 employees.

Upgrade plans for the properties always are on the drawing board.

Plans call for spending more than $1 million to refurbish the Hilton Garden Inn on the east side of the airport entry road beginning in a few months, Patel said. Both were acquired in mid-October.

Across the street is the older Clarion Inn — his largest with 137 rooms — which is to get what he described as a “light” update.

In the long-term — five to seven years — Patel sees the possibility of bulldozing it and replacing it with maybe two motels on the 4 1/2-acre site.

A cluster of hotels is not new to Patel. He has several in the vicinity of East 31st Street and South Memorial Drive. All have brand names and Patel said he only wants to operate under the top franchises.

“We just want to have the best product at a fair price,” he said. The company slogan is: “A leader in hospitality.”

The airport hotels may not be the end of expansion for Promise Hotels.

“We are always looking” to either acquire new properties or “will do new construction”
Although “Mom and Pop” — Rayman and Vajuya Patel — are retired, the “we” includes his wife, Tina, the chief financial officer for the company dealing with banking, finance and accounting.

Their two sons — 9 and 11 — aren’t learning the business from the bottom up as did their father. Instead they attend the University School at the University of Tulsa.

An older brother and a sister are also in the Tulsa hotel business while another sister in the restaurant business.

In the 1950s a great many of the immigrants to the U.S. were from India who came to meet the demand for engineering and math skills.

One of those engineers working in San Francisco invested in a hotel which his wife ran during the day and him during the evening, Patel said. It started a trend.

Today, more than half the hotels in the U.S. are operated by immigrants from India or their descendants, Patel said.

“From the pilgrims to the guys who became citizens last week or whenever, they came for the opportunity.”

“I am so humble to be in this country,” Patel said.